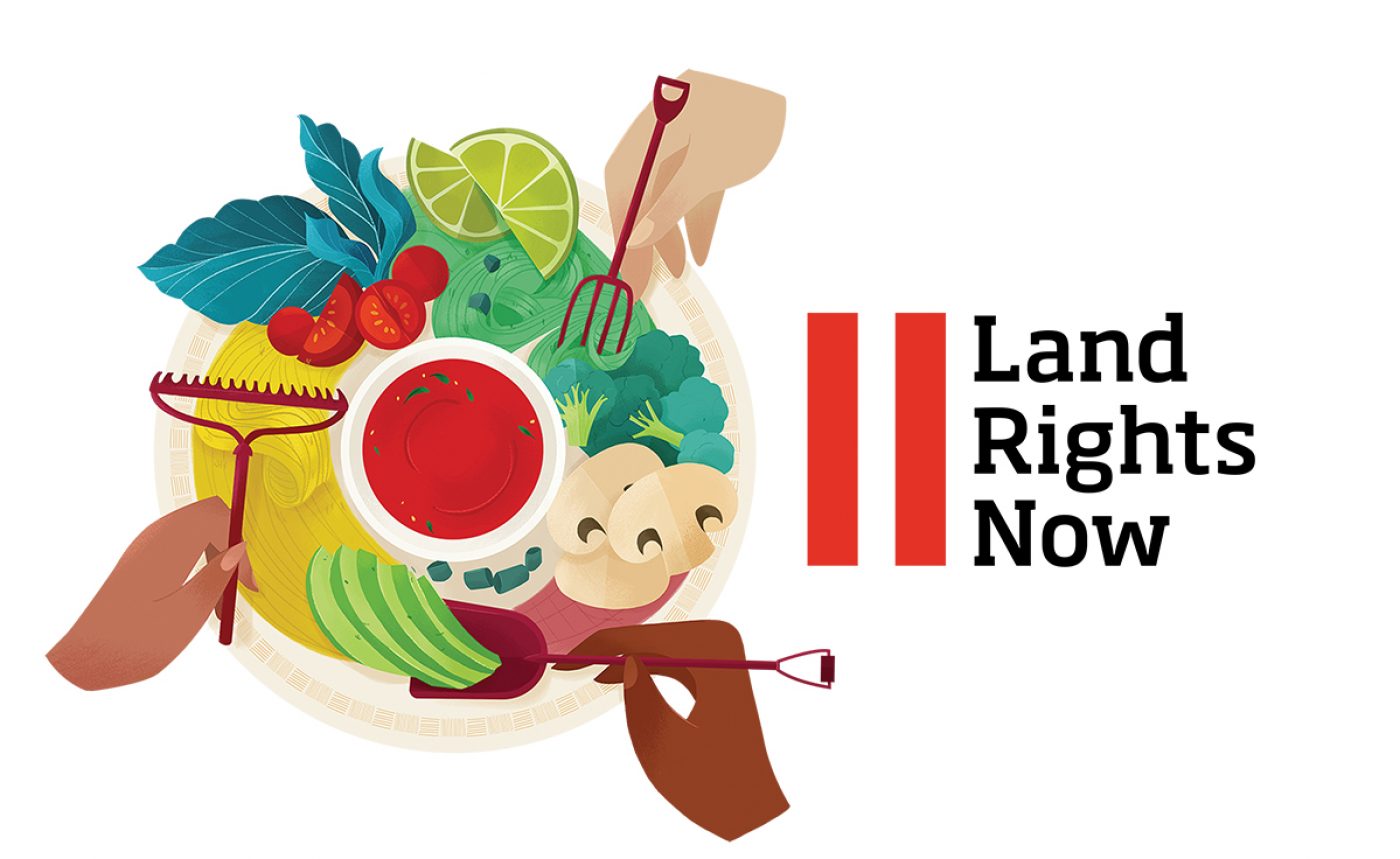 Thousands join community advocates in Kenya, Myanmar, Peru, Uganda, Guatemala, Indonesia, Australia and at least 18 other countries to call on governments to secure their rights to the lands that form the basis for global food security and help mitigate against climate change

“Communities around the world rely on their customary lands to feed their families. But their lands also feed the world, and their forests regulate the climate that underpins global food security. However the global food system is deeply linked to land grabs, and agribusiness is the most dangerous sector for activists” said Joan Carling, Advisory Board member of Land Rights Now and recent winner of the Champions of the Earth Award for lifetime achievement, the UN’s highest environmental distinction. “We are calling on governments to recognize and secure those land rights, and on consumers to consider the impacts of their purchases on both local peoples and the resources we all depend on.”

Today, the Ogiek People in Kenya, the Acholi People in Uganda, the Shipibo in Peru, and numerous others around the world called for the recognition of their rights. These actions are part of the Land Rights Now campaign, launched in March 2016 to double the amount of land owned or controlled by Indigenous Peoples and local communities by 2020, and now counting more than 800 organizations and groups rallying behind it.

“People have the power to call on their governments to make change,” said Luca Miggiano, Campaign Manager at Oxfam, one of the participants in Land Rights Now. “This mobilization is about citizens around the world standing with Indigenous Peoples and local communities as they defend their rights and celebrating their contribution to a more food secure and more just world. What we hear is one voice across all continents: land rights are food rights.”

Governments around the world largely fail to recognize these rights: despite having customary ownership to half the world’s lands, Indigenous Peoples and local communities only have legal ownership over 10 percent of it. This gap leaves community lands vulnerable to expropriation for large-scale agriculture, mining, or infrastructure, which typically benefit fewer people and are more environmentally destructive than land use by local communities. According to the Land Matrix, at least 49 million hectares worldwide have been subject to international large-scale land acquisitions over the last decade. These are largely driven by consumers’ demand for cheap food or energy, with oil palm (6 million hectares), jatropha (2.4 million hectares), and sugar cane (1.9 million hectares) dominating.

Community land management also helps regulate the climate that enables global food production. Communities have successfully safeguarded many of the world’s forests for generations. Research shows that their lands store massive amounts of carbon—at least 300 billion megatons—and that secure rights lead to lower rates of deforestation and higher rates of carbon storage. At least one-third of the carbon stored in community forests in the tropics and sub-tropics is on lands that lack formal legal recognition, leaving them vulnerable to land grabs that can destroy livelihoods, devastate the environment, and destroy local food sources.

Events are planned in at least 25 countries, in which citizens and communities join together to talk about food and land rights, and those hit hardest from land-grabs make their voice heard. These include:

Despite a landmark 2017 ruling by the African Court on Human and Peoples’ Rights that the Ogiek Peoples are the rightful owners of Mau forest in Kenya, the government has yet to return their customary lands to them.

About 40,000 Ogiek live in the Mau forest, which is the source of their food, income, medicine, shelter, and cultural sites, with beekeeping their primary livelihood source. They have acted as guardians of these lands for generations, yet they face encroachment from logging, tea plantations, and illegal settlements. Thousands have been forcefully evicted from their homes.

“The 2017 Court decision was a beacon of hope—not only for the Ogiek, but for Indigenous Peoples across Kenya and indeed the entire region,” said Daniel Kobei, Executive Director of the Ogiek Peoples’ Development Program. “But the government has yet to implement this decision. We are still being evicted from our homes. We are still barred from our customary forests.”

The construction of the Asian Highway through Karen State has already resulted in widespread land confiscations and military clashes that displaced more than 1,000 people. Community advocates fear that the next phase of the road—which will pass through 17 villages and 1 town—is proceeding without the consent of the affected communities and will lead to further conflicts and displacements. The next phase is being funded by the Asian Development Bank and is set to be completed by 2020.

Many lost their lands altogether in the construction of the first segment of the highway. With 70 percent of the region’s population dependent on the land for survival, this puts entire communities at risk. Villagers were retroactively informed that they would receive compensation, but it was not enough to buy new land and there was no opportunity for negotiation.

“We disagreed because we would get this only one time in our life, whereas the farm will provide for us forever,” said Daw Su, a local farmer. “The farms are the rice pot of our family. We can send our children to school because of this farm.”

“Local peoples were left completely in the dark about the construction of the road through their lands and could only deduce project plans when signs were put up and construction was imminent,” said Way Lay, Senior Advocacy Coordinator at the Karen Human Rights Group.  “Many families are still displaced, without compensation, resettlement options, or even adequate food. We are calling on the government to compensate them or return their lands to them—and to ensure that the next phase does not become a repeat of history.”

Peru: The Shipibo struggle for recognition of their land rights while companies easily acquire their territories

The Indigenous Shipibo community of Santa Clara de Uchunya, in the Ucayali region of the Peruvian Amazon, is facing invasion of its ancestral lands by corporate oil palm plantations and land traffickers. The community relies on its ancestral territory for hunting, fishing, farming, and gathering fruit. Yet the government has only recognized their rights to a small part of the territory, while companies circumvent the law to turn the forests over to large-scale monoculture.

“Oil palm doesn’t bring us any future, it brings misfortune. It brings poverty. They deceive you and in the end they grab your land and you are nothing. Your children become their slaves and you no longer own your territory,” said Rodrigo López, a community member in Santa Clara de Uchunya.

Despite the Shipibo’s claim to the land, the government gave individual titles to outside settlers, who sold their lands to a palm oil company in 2012, leading to the clear cutting of the forests without the Shipibo’s consent. Despite challenges in court and the Roundtable on Sustainable Palm Oil (RSPO), palm oil production continues, and new settlers have received title to parts of the Shipibo’s lands.

The case has become emblematic of what is occurring in Peru and across the Amazon region. Large-scale agriculture projects—deeply connected to international food and energy markets—are destroying forests traditionally occupied by local peoples.

Uganda: Indigenous Peoples forced from their homes “in the name of conservation” despite court victory

Rather than being recognized for their role in having helped preserved precious wildlife, the Acholi People in Uganda are being criminalized and evicted from their customary lands.

The Acholi people customarily inhabit part of the Amuru District in Northern Uganda, but the Uganda Wildlife Authority (UWA) says they are illegally residing in a designated wildlife area. Since 2011, the UWA has backed a series of forcible evictions, carried out by rangers, police, and soldiers from the national army, the Uganda People’s Defence Force. Over 844 huts have been destroyed and 26,000 people displaced.

“The Acholi depend entirely on their land,” said Jimmy Ochom, Programs Manager at the Uganda Land Alliance. “Farming not only feeds families but also provides revenue for children’s health and education. Many of those evicted now face hunger or must rely on food aid.”

A 2017 court case declared that the land belongs to the Acholi and evictions must cease—but they have continued in 2018. One man was killed by an army officer, and an elderly woman died while fleeing an eviction attempt. Two hundred people have been forcibly removed from their lands this year.

769 Q’echi families were violently evicted from their homes in the Polochic Valley to make room for a sugar plantation. The government promised to return this land, but more than half of the families are still waiting. Large-scale palm oil, sugar, and banana plantations; cattle ranches; and mining and energy project are increasingly encroaching on the lands of the Mayan Q’eqchi and Pomoqchi peoples, who have inhabited the Polochic Valley and the areas around Lake Izabal since pre-colonial times.

This is a common pattern across the country: Indigenous Peoples constitute more than half of Guatemala’s population, but still contend with violence, discrimination, and the failure to recognize their land rights. Without land, indigenous families in Guatemala often suffer extreme poverty and hunger. Research finds that local economic development is typically worse under plantation models than the traditional small-scale farming they replace.

In Australia, members of the Yuin Nation—a coastal people who have for generations depended on sustainable fishing in their ancestral waters for their subsistence—have faced criminal charges and persecution by the government. This crackdown on small-scale cultural fishing by members of the Yuin Nation belies the fact that commercial fishing operations in nearby waters bring in much larger hauls with more detrimental environmental impacts, and that this production is largely for export rather than sustainable consumption.

“I knew I had a traditional right to do what I was doing, hunting and gathering for my people,” said Kevin Mason, a Yuin Nation elder and fisherman who faced jail time for fishing. “Over the years I have just been hounded like a second-class citizen. With all this worry they have put on me, persecuted for something that is traditionally mine in the first place.”

Today’s actions are part of a growing movement by indigenous and local communities around the world demanding respect for their rights, mobilizing to ensure that their voices are heard, and highlighting the role they play in the global struggle to prevent climate crisis.

“Land Rights Now is a unifying call to respect the rights of up to 2.5 billion people worldwide who rely on community-held lands. These rights underpin global food security and are vital to the fight against climate change. In spite of incredible risks, Indigenous Peoples and local communities are raising their voices and taking action to defend their rights and protect the resources we all depend on. It is time for the world to listen,” said Carling.

Land Rights Now is an international alliance campaign that aims to secure indigenous and community land rights worldwide. Since its launch in March 2016, over 800 organizations and thousands of individuals from all corners of the world have joined the campaign. Visit: www.landrightsnow.org