A call to action for land rights now in Paraguay

Displaced from their ancestral lands, for over 20 years, 76 Enxet Sur families have been living by the side of a road without access to adequate food, water, housing, education or health services. Their roadside camp nonetheless is a site of resistance: a historic land rights struggle which brought their case to the Inter-American Court of Human Rights.

In 2005 the court ruled in favor of the community and called on the Government of Paraguay to return ancestral lands to Yakye Axa, compensate them economically and support development projects in the community.

But today, 12 years later, the community continues to live in conditions of poverty by the side of the road.

“This year no one died on me,” says Inocencia Gómez, an Enxet Sur health worker, explaining how over the years children and adults lost their lives as they did not get medical attention on time. “When there are sick people we have to bring them to the nearest city, 70km away and pay for this from our own pocket (US$53).” The only medicines in the community are brought by Inocencia who travels 320km by bus to source supplies. 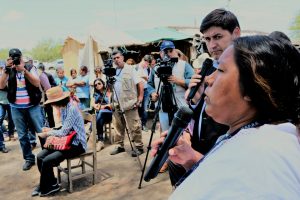 “We want to go back to our lands – too much time has already passed,” says Inocencia Gómez

Seven years after the international sentence, in January 2012, the Government of Paraguay acquired 12,312 hectares of land for Yakye Axa. Over-joyed the families began to pack up their belongings to move to their new home – only to find that there was no access road. 80km of thick vegetation meant the community would be totally isolated and at risk of severe flooding. It is an area only reachable by helicopter during the rainy season. They returned to the side of the road amidst promises from the Government it would build an adequate road. Construction has been stalled by lack of agreement with private landowners.

But Inocencia and the families of Yakye Axa will not give up their struggle. “We want to live like any other human being, with well-being (buen vivir)’’ says their community leader Albino Gómez.

The international sentence on Yakye Axa was quickly followed by two more. In 2006 and 2010 respectively the Inter-American Court called on the Government of Paraguay to return land to the Indigenous communities of Sawhoyamaxa and Xákmok Kásek who had also been displaced.

As with Yakye Axa, these communities still waiting.

Stand with Inocencia and all three Indigenous communities calling on the Government of Paraguay to comply with the international sentence and return their land once and for all.

Photo top: Celina Amarilla is from the Indigenous community Xákmok Kásek, one of three communities in Paraguay to win a historic legal battle for the return of their ancestral lands. Almost a decade later, she and her community are waiting for the Government to fully comply with the sentence from the Inter-American Court of Human Rights. Credit: Santi Carneri/Oxfam Paraguay