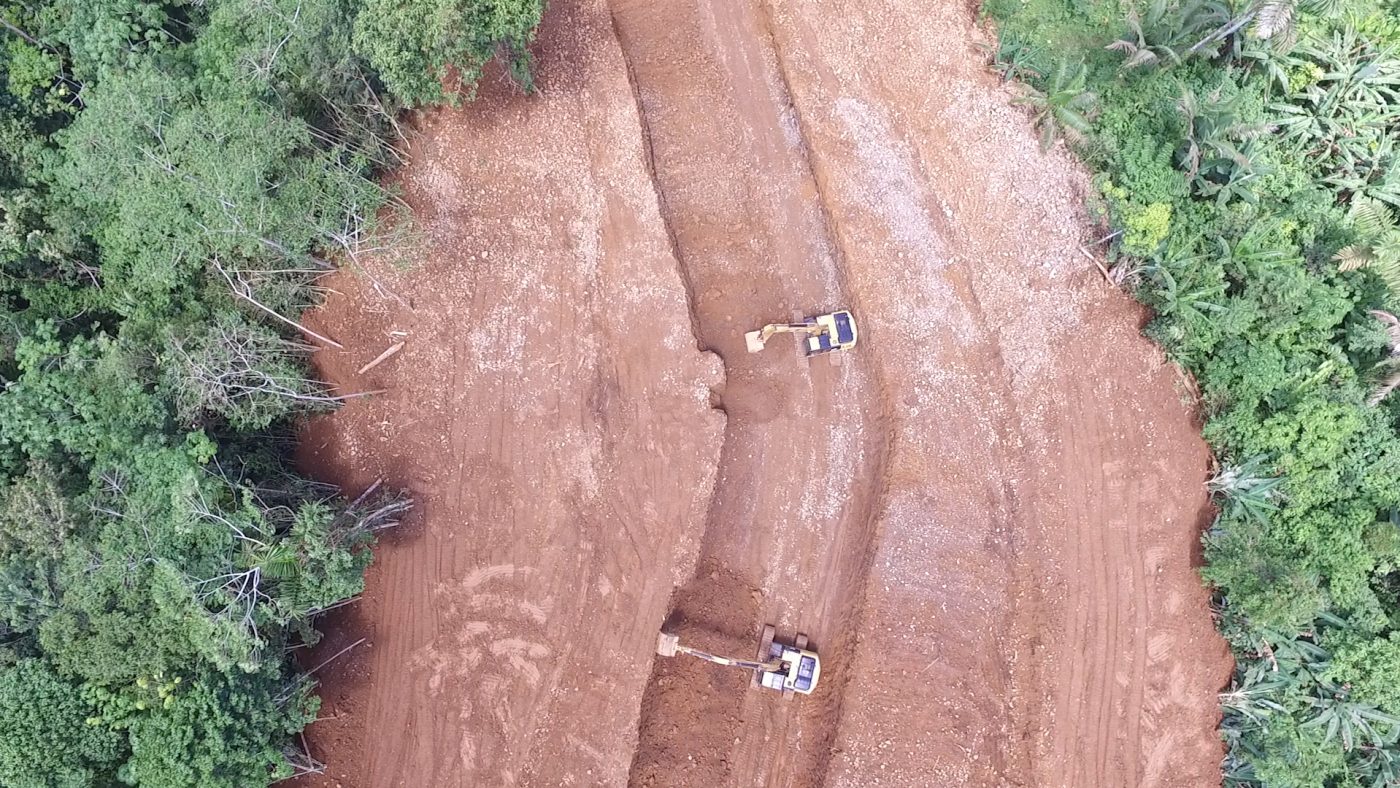 This article is a summary of Atlantic Conquest Expose by Guido Bilbao, written with the support of the Pulitzer Centre on Crisis Reporting.

515 years after the arrival of Columbus, a silent, yet expanding operation now threatens the existence of dozens of communities in one of the last lungs of primary rainforest of Panama— the Mesoamerican Biological Corridor. A massive infrastructure project that includes miles of new roads, hydroelectric, mega-mining, a network of electric power transmission lines and associated groundwork in protected forests. These projects are anchored by nineteen miles of asphalt that will connect the Panamerican Highway with the Caribbean sea.

The so-called Conquest of the Atlantic has been a dream of the Government of Panama since the 1970s but construction only began in earnest in 2014. With 40% of the work underway, when complete, it will stretch 21 miles through the jungle and diverse indigenous communities and will consolidate a road corridor from the Panamerican highway to the Caribbean sea. It is the opening of a project that will exploit natural resources at a terrifying scale: mega-mining, hydroelectrics, new transmission lines, roads and mass tourism. A devastating combination in a country sensitive to climate change.

Indigenous communities, though, have been told it is a social project that will improve their links to the greater world.

The Ngäbe and Buglé indigenous communities, with close to 350,000 people, have inhabited the mountains in north-west Panama for over 10,000 years. The remoteness of this landscape has buffered them from the growing trend of development and tourism that dominates Panama. Their isolation is what has saved their forests from exploitation and permitted them to maintain the thread that connects their way of life with ancestral times. Until now.

“In our cosmovision, man does not own the earth. We both need each other. The forests give us our sustenance and we are its guardians for the next generations” Chief Saturnino Rodriquez, leader of the community congresses of one of the affected areas.

”Caring for nature is like taking care of oneself. It is the way to survive,” says Cristina Carpinteros, a young Buglé woman. Photo: Raphael Salazar

For Indigenous People the forest is life-space, not an opportunity for business. They live off the land, collecting fruits, fishing the rivers, and planting small parcels that are left fallow every five years to allow for the regeneration of the land.

The government has promised the Indigenous communities that the Atlantic Conquest will bring them prosperity, lifting them out of poverty. But the view on the ground is different.

“I think the road will bring good things and bad things”, says Mariela, a young Buglé. “The good things will be for those from outside and the bad things for us”’

One of the largest quarries that produces gravel for the road runs along the Luis River, the primary source of drinking water for these communities. This year, the river turned the color of chocolate. The Daily Newspaper El Siglo reported about children affected by diarrhea and stomach pains from drinking the water.

Indigenous communities will continue to resist and defend their territories and call for recognition of their collective land rights. According to Latin American historian Daviken Studnicki-Gizbert “It is shown that when the moment arrives, the indigenous sustain the longest fights. There is much greater cohesion and more solid support for their leadership. Divisive tactics do not work”

The Pulizter report also documents how Dutch businessman Max Van Rijswijk has acquired 6,650 acres of land along the Caribbean coast under the guise of seven separate foundations. The case appears in the famous Panama Papers investigation. Families in the Calvébora coastal area were promised $100,000 or more for their lots and were told these would be converted into conservation areas to protect the turtles. Years later, many haven’t seen more than 10% of the money promised to them while their lots are now being sold for millions of dollars by Caribbean Riviera, Max van Rijswijk’s real estate company.