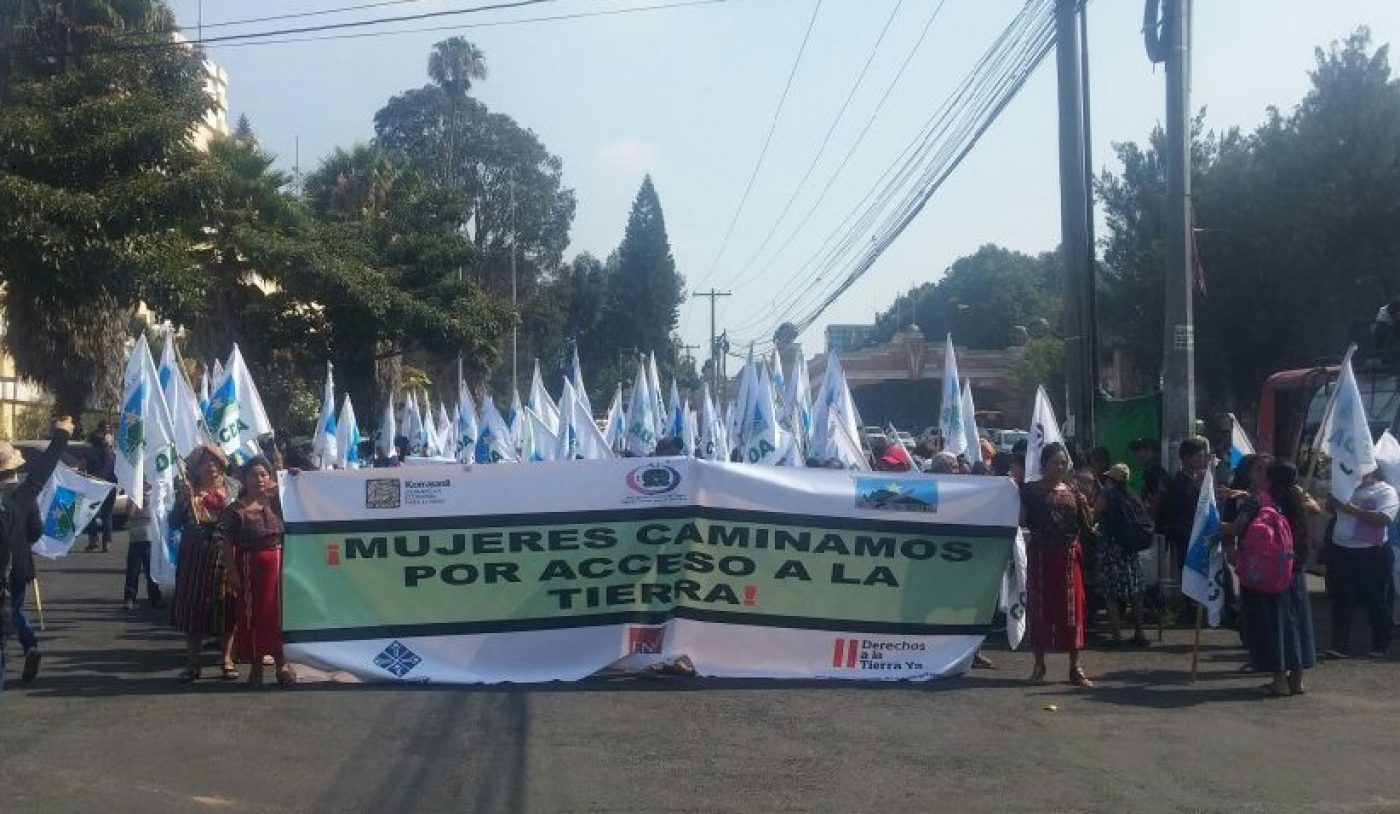 Indigenous peoples and peasant farming communities in Guatemala are facing a threat to their existence due to loss of their land to agribusiness plantation. The community of La Ayuda in the coastal region is completely surrounded by palm oil, which provides only low paying seasonal jobs for a few members of the community. In the face of violence and intimidation, many local people have sold their land and are forced to leave in search of livelihoods elsewhere, with some migrating to Mexico and the United States. The remaining community members fear their village will disappear as palm oil production continues unchecked. Those that continue to farm have seen streams and rivers diverted away from their land and local drinking water sources contaminated by chemicals used on the plantations.

The palm oil industry is expanding most rapidly in the northern lowlands of Guatemala. However, many indigenous communities have seen the effects of palm oil plantations and they are resisting. Margarita Osorio, a Maya Q’eqchi’ community leader in Alta Verapaz said:

“The destruction of the forests began when they started planting the oil palm. We feel challenged and intimidated by the way they criminalize and threaten us.” She continued: “Before, we could go draw water in five minutes because we were nearby water sources. Now, we have to walk to the river that’s half an hour away. This is not how we want to live, but we’re forced to.”

In stark contrast to the environmental destruction wrought by the palm oil industry, 13 indigenous communities in Raxruhá municipality, Alta Verapaz, have preserved what is the last remaining forest area in the region.

Using ancestral knowledge, their land is managed collectively, a practice which includes designating 10% of the land as community forest. Organized in community assemblies, rules regarding the land available to each families for agriculture, wood for domestic use and the organization of communal reforestation initiatives are agreed on. When community members break the rules, strict sanctions are imposed. These practices have ensured that the community lives in harmony with the environment – the flora and fauna is conserved and all community members have access to the natural resources they need. As a result, 80.4 per cent of Sierra Chinajá has been designated protected forest land and is managed collectively by communities in conjunction with the National Council for Protected Areas of Guatemala (CONAP). However, according to indigenous communities, CONAP does not comply with its responsibility to monitor and prevent illegal logging.

At the heart of the problem are land rights and the lack of recognition of community land rights, in particular. If indigenous communities had legal title to their ancestral lands and the government invested in family agriculture as opposed to large scale palm oil plantations – the quality of life of indigenous people would be greatly improved, and deforestation would decrease. In fact, economic analysis has shown that food crops can provide more benefit to the local economy than palm oil.

Indigenous communities are fighting to stop human rights violations, the misuse and contamination of water sources, and land grabbing at the expense of local peoples. In 2015, an alliance of civil society organizations brought their case before the Inter-American Commission on Human Rights and asked that the Guatemalan government to stop the expansion of the palm oil industry because it is undermining human rights and the way of life of indigenous peoples. The Guatemalan government declined to act.

We are not up against an isolated problem or a situation that involves only indigenous and peasant communities and agribusiness executives. It is a national problem that destroys nature and undermines our already precarious quality of life. Sooner or later all of society will pay the consequences of this grave destruction.” Said the Network of Communities Affected by Palm Oil.

As part of Land Rights Now Global Earth Day Mobilisations, rural women marched to Guatemala City to call on the government to increase the budget designated to access to land and agricultural production. They marched to the Ministry for Food, Agriculture and Livestock and the Office of the Land Fund where they denounced the violent community evictions and demanded land ownership and tenure rights highlighting currently 75 per cent of the Land Fund budget goes towards leasing of land and only 17 per cent for purchase of land. They also called on the Ministry of Agriculture to allocate 15 per cent of its budget to support rural women who play a major role in food production.