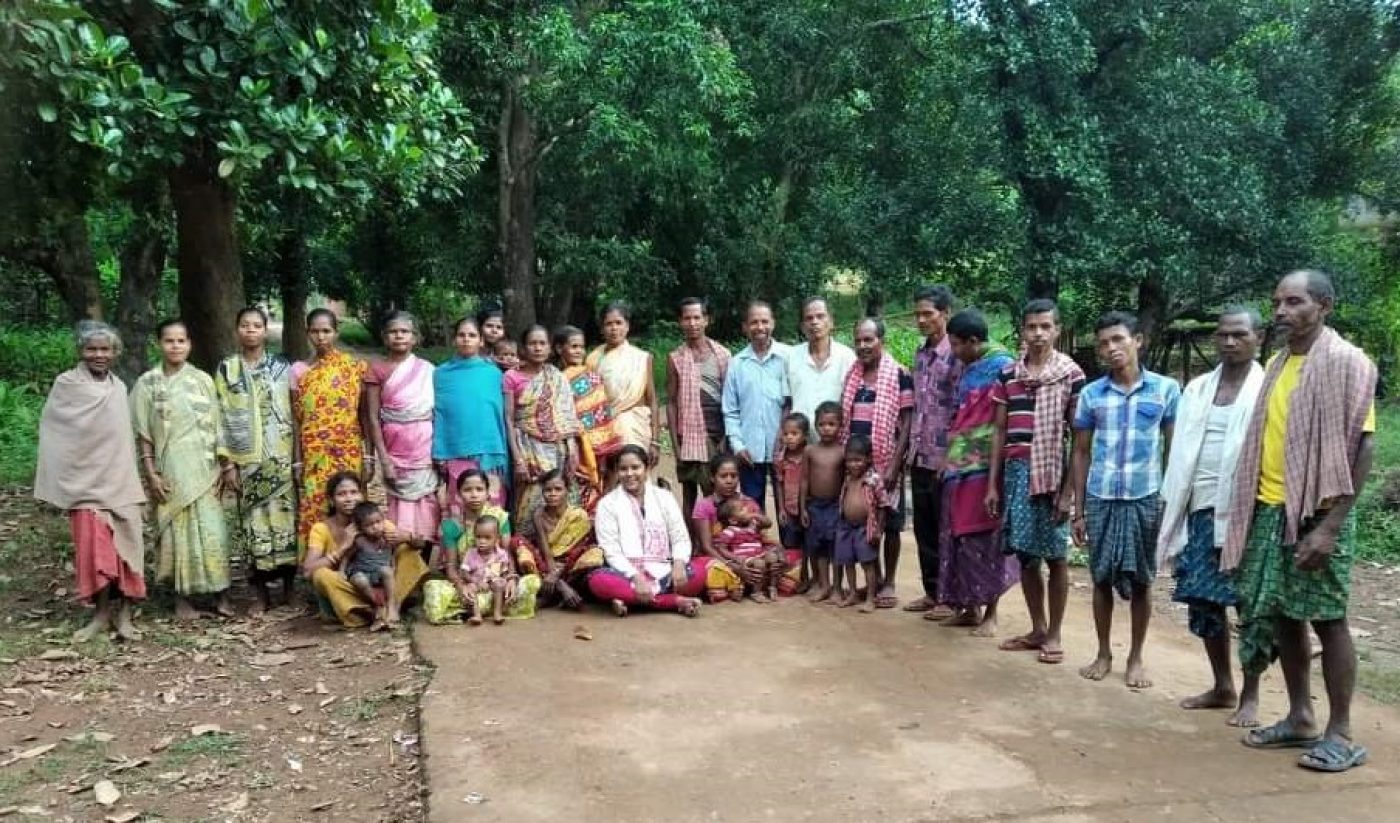 Take, for instance, my surname. “Soreng” which means rock in the Khadia language – and other surnames of our tribal group include “Kiro,” which means tiger, “Kullu,” which means tortoise, “Dung  Dung,” which is a fish, “Kerketta,” which is a bird. This shows that when we say that nature is our identity, we mean it. It is embedded in our names.

The relationship we have with our land goes beyond something that can be sold or given away. Tribal communities rely heavily on their lands.

During the global pandemic, for instance, the community of Odisha where I work was much more resilient against the lock-down. Communities, where land rights are recognized had food to eat from the forests. They could very well grow their crops and have food from their own land. Their sustainable way of living made the community members more resilient. In this case, the forests protected them. I think that it is very powerful to see.”

Securing land rights is important because land is my identity. People have been trying to snatch land from tribal communities for developmental projects. But taking land from community members is snatching their identity. People say that compensation will be given if their land is taken. However, land loss cannot be compensated because for the tribal communities, land has spiritual, cultural, and identity connections.

My journey towards climate action

It began with the inspiration and guiding examples of my family. My grandfather was one of the pioneers of community-led forest protection committees in our village. His strong commitment to ensuring a sustainable relation with nature inspired me to start walking the path towards climate action and policy-making.

Together with my grandfather, my parents have been a guiding light in the path of advocating for tribal communities. Both were part of the tribal movement. My mother is active in Adivasi women empowerment, and my father is a strong advocate for empowering the local institutions and making tribals an integral part of decision-making processes.

Both of my parents told me since my very early childhood that if you want to make constructive changes in society, it is important to enter into politics and decision-making processes.

These words strongly resonated in me when I saw that the situation of the tribal community in the area where I come from was very poor. And this was in great part because of land-grabbing, eviction and displacement of people from their lands.

I witnessed how in my village, people were being displaced, and their land was being grabbed under the excuse of developmental projects. This made me reflect that it has to be at the level of policy-making where we need to work for preventing these things from happening.”

In 2015, when I was studying for my BA in Political Sciences, I went to Chhattisgarh as part of one of the many camps and workshops we attended. There I saw how tribal communities were also protecting the forest and following an eco-friendly way of living  similar to my village. This made me realize how closely related to nature we are. But I also sadly saw that even if our local communities contribute immensely to forest protection, we are the most affected because of land-grabbing, migration, and displacement.

I decided then to study for a master’s at the Tata Institute of Social Sciences. During one of my courses, I saw how indigenous communities, following their traditional knowledge and practices have been contributing immensely towards climate action.

In those years, I lost my father and this made me realize the importance of documentation, preservation, and promotion of our traditional knowledge and practices, specifically in terms of climate action.

When I started working in climate action, I felt that the non-recognition of land and forest rights is a major problem acting as a hurdle for indigenous people struggling for climate action. In the concrete case of India, we have the Forest Rights Act 2006, which addresses the historical injustice to India’s Scheduled Tribes and other traditional forest dwellers.

But the Act has not been implemented adequately. Because of this, people are not secure, and they are under threat of displacement, migration, and eviction. When I saw that, I was convinced that I wanted to work on the adequate implementation of the Act.

If we really want to walk towards climate action, we need to ensure that Indigenous Peoples are part of the decision-making processes. They know, and their experience of conservation and impact is very important for policy-making.

We need to emphasize that Indigenous Peoples are essential for climate action because they are doing immense work. They are the ones who are protecting 80 percent of the biodiversity of the globe. But the sad part of this is that they are also the worst affected  by the climate crisis and social injustice.

These days everyone is talking about sustainable development and sustainability. Land-grabbing and land compensation are not sustainable. If we want tribal communities to keep contributing to climate action, it is crucial to empower them.

Until and unless the land rights of Indigenous Peoples are recognized, we won’t be able to continue to work for climate actions

For preserving nature and fighting climate crisis, land and forest are important in terms of carbon sequestration and how we want to limit carbon emission to stick to the commitments of the Paris Agreement. If this is to be sustained, land tenure needs to be a prerequisite.

Also, for instance, if we want to achieve the UN Sustainable Development Goals, we need to recognize the land rights of Indigenous Peoples and local communities.

We need to advocate for land rights recognition

Everybody is talking about sustainability, women empowerment, gender justice, and climate action for a better world. I think that all of them are interconnected with the land rights of the Indigenous Peoples.

Looking at the impact of securing land rights, supporting Indigenous Peoples is not only benefiting indigenous communities, but it is also helping the entire world. That is why environmentalists need to support Indigenous Peoples in their struggle for Land Rights.

Thus, I seek support  from the entire world:  We need you to stand in solidarity with Indigenous Peoples who  constitute a major portion of the global population and are  important stakeholders in climate action.  We need you to advocate for Respecting, Recognising and Enforcing the rights of Indigenous People and local communities over their territories, land and forest and ensure that traditional knowledge and practices are documented, preserved and promoted.

Archana Soreng is from the indigenous Kharia Tribe from Bihabandh Village of Rajgangpur in Sundergarh, Odisha, India. She is a member of the UN Secretary General’s Youth Advisory Group on Climate Change and is engaged in  research and advocacy on climate action, preserving traditional knowledge and Practices of indigenous and local communities, and land rights.