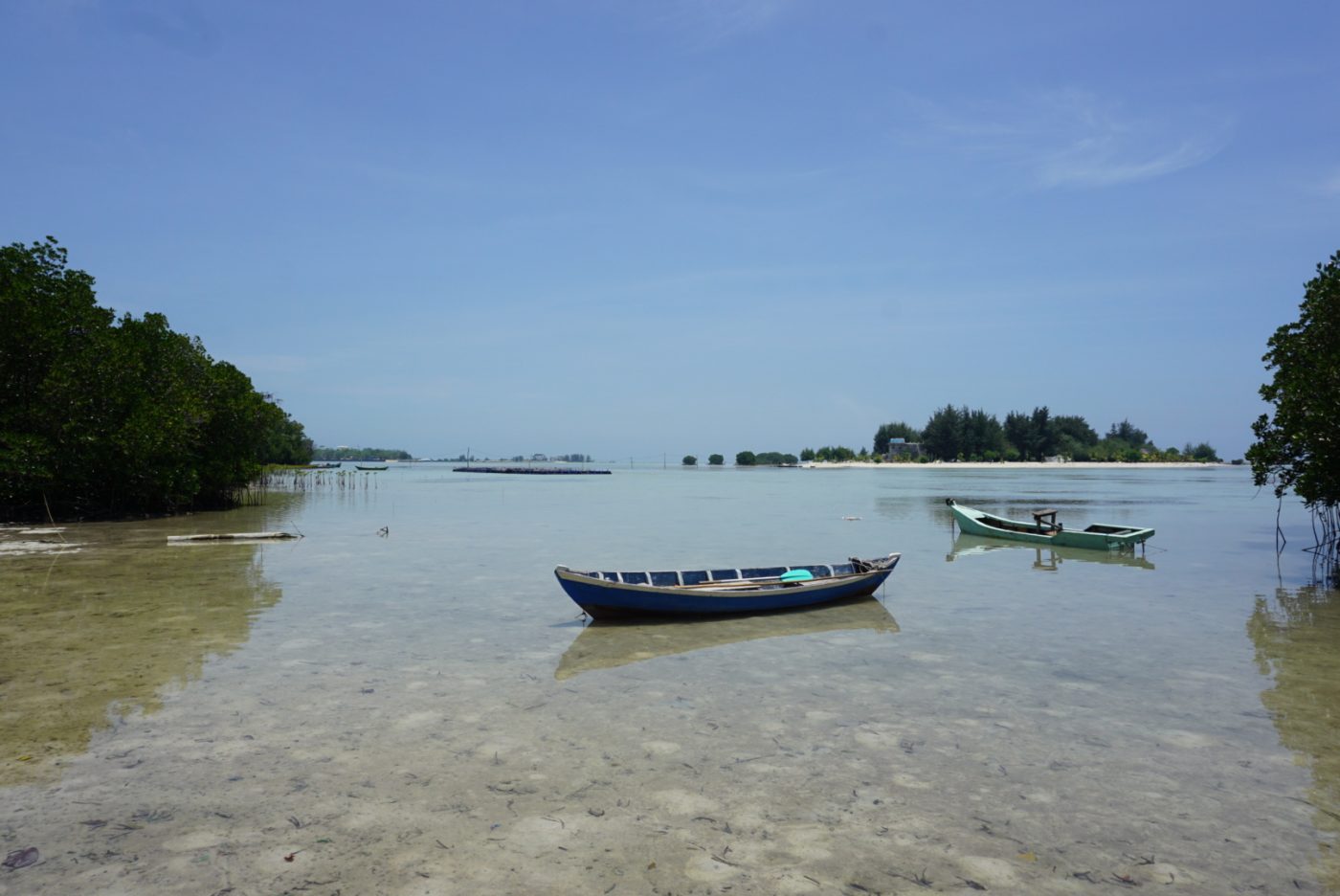 Investors are grabbing an entire island in Indonesia to develop a resort, displacing the community and destroying local eco-systems

Hundreds of families are facing the threat of eviction from the island of Pari in Indonesia in order to possess the whole island for a corporate tourist resort. This pristine 42,5-hectare island has been their home for generations and they have played a key role in protecting its fragile eco-system of mangroves and coral reefs, key to the fight against climate change. Today all of this is under threat but the community of 300 fisherfolk families refuses to give up and are mobilising to save Pulau Pari.

This is their story. 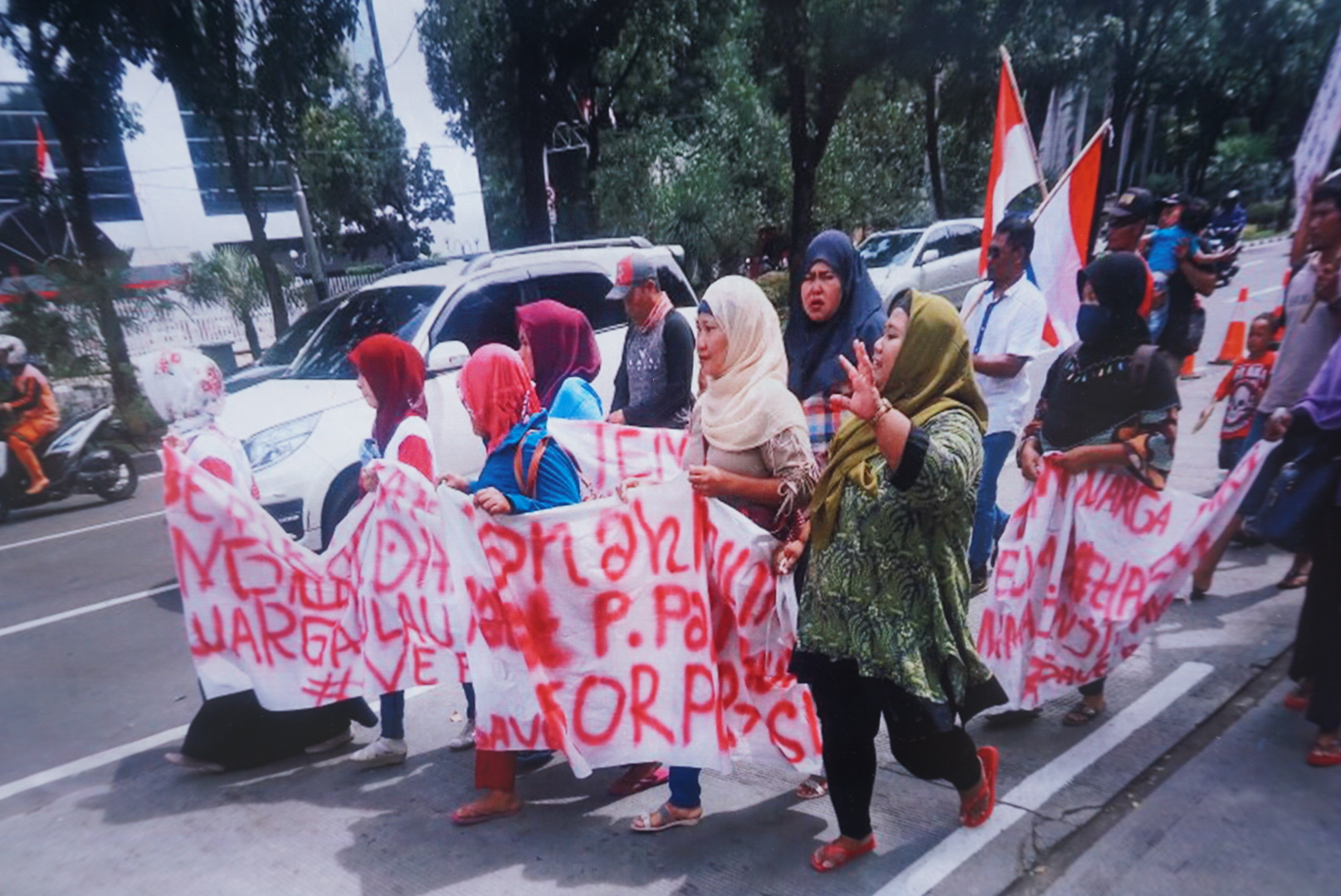 Women from Pulau Pari standing up for their rights.

Pulau Pari is one of 108 islands, collectively known as the Thousand Islands in the Jakarta Province and home to small coastal communities. It once had a thriving seaweed industry and exported up to 20 tonnes a year to Japan. In addition, the nearby uninhabited island of Pulau Tengah provided them a growing area for seaweed plantation and coral reefs to fish in nearby. All of this changed drastically when Pulau Tengah was bought by a company. The island was turned into a resort with 48 villas and multiple piers for yachts. This building work combined with climate change, affected the ocean currents and as a result the seaweed growing areas were destroyed. On top of that, the community was forbidden to access Pulau Tengah or fish nearby.

“Four years of struggle. It took a lot of sacrifice, resources and time. I will keep on fighting for my livelihood, for my community” – Mr. Sahrul 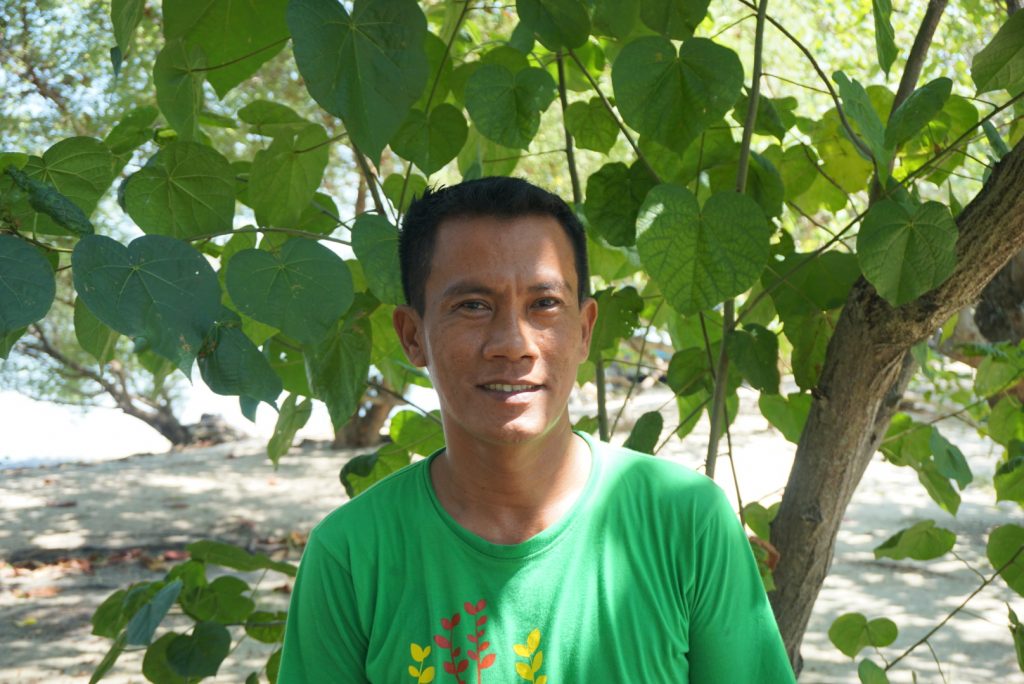 “The ocean is the mother which provides food, live, identify and courage. If you destroy the mother, you destroy human kind.” – People from Pari Island

In response to this crisis, the community held an island-wide gathering and decided to follow the example of other islands and develop community-based tourism to sustain their living. They opened up beaches for tourism creating a unique experience for eco-conscious tourists. The community selected a number of residents to look after the maintenance of the beach, including cleaning, guarding and providing public facilities such as toilets. The costs of beach maintenance was covered by small donations by tourists – funds were managed by an association set up by all community members. With the income generated, they were able to improve roads, public facilities, paying cleaners, build places of worship and support orphans.

“We divide the tasks among ourselves. Some rent out bikes, others have homestays, other provide food in food stalls, we all have a role.” – Member of the community

Success however attracted attention. In 2014, an Indonesian investor – with the support of the Government – claimed 90 percent ownership of Pulau Pari stating it is part of an investment plan to exploit Indonesian islands for tourism. The other 10 percent of the island belongs to the government and is used as a research and conservation area.

A key problem is that while the community did own formal land titles, during the transition from the Dutch colonial cadastral system in 1969, these were never converted formally.  This loophole enabled National Land Agency in 2015 to issue 62 individual land certificates in the name of people from outside of Pulau Pari with no connection to the island. The company got 14 certificates for the right to build in some part of the island and claimed the land owned by these unknown 62 individuals as theirs which in practice would determine the company’s control over the island. In Indonesia, private companies in fact don’t “own” land, but “own” the right to build and use the land. However, the government failed to adopt principles, such as Free, Prior and Informed consent by the community, before they issued the certificates and permits for the company to operate.

Since then, the island has been crowded with security guards, fences, and an atmosphere of intimidation. 19 houses have already been demolished and the evicted families received compensation of 171 USD per household – barely enough to move to another location let alone build a new home.

At the same time, the company has claimed the beach called “Pasir Perawan” beach which is a key part of the community’s sustainable tourism scheme. Today when Pulau Pari’s residents try to manage the beach, they face violence and intimidation. 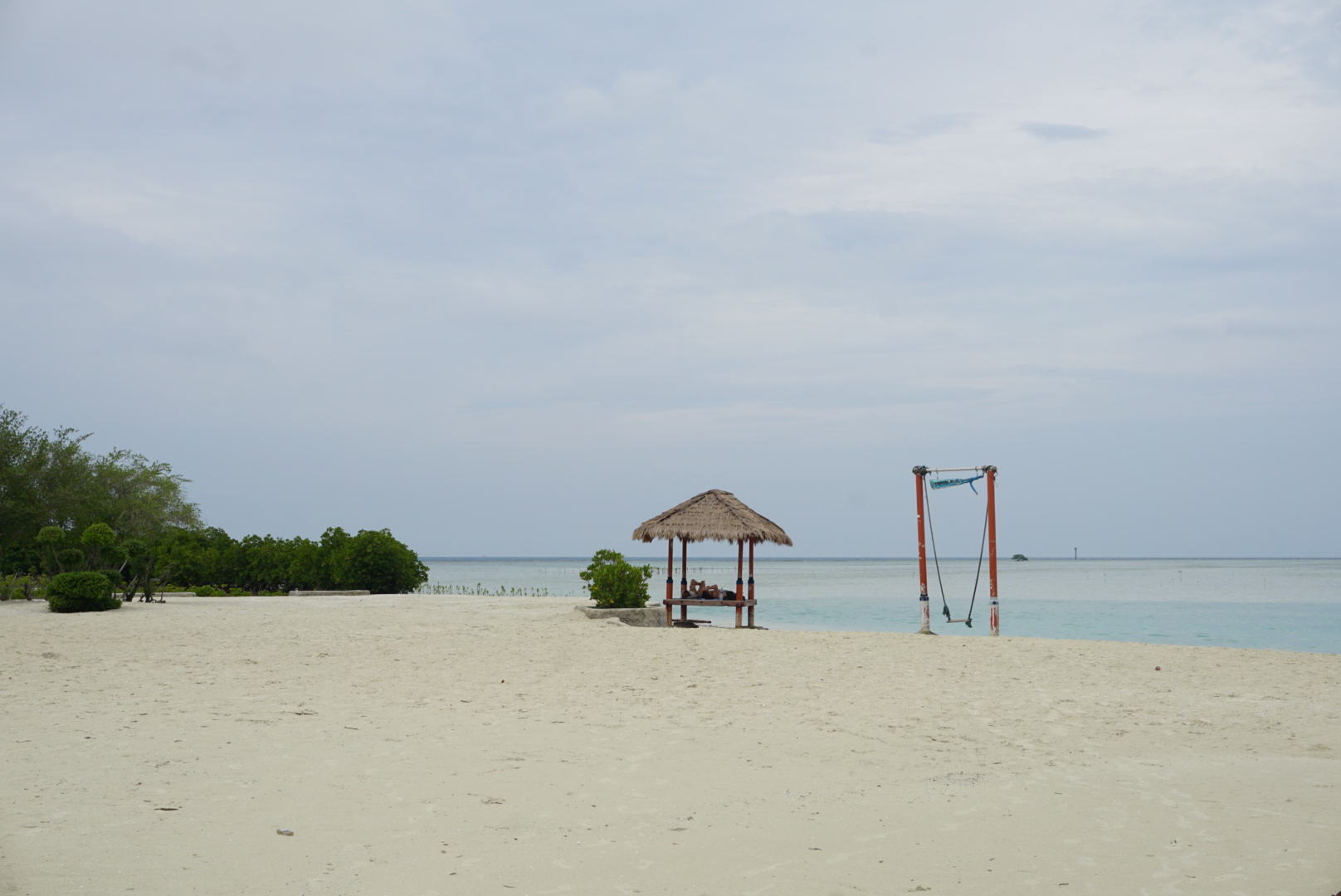 This is the community’s beach, but 90% is being claimed by the company.

“The company came to grab the whole area, not any fisher woman’s life is safe. We are in constant fear for threats by the company. They come when our husbands are fishing at sea. In 2017 there was a big clash with the police. The women united and made a human barricade to protect their land and avoid a billboard to be installed which claimed that the land was owned by the company. They never expected the police to use violence against women.” – Woman from Pulau Pari

Since 2015, four people have been arrested and jailed. They have been accused of entering land without permission, this is the land where they have been living for many years. They have also been accused of maintaining a beach without permission. In March 2017, three residents of Pulau Pari were arrested for extortion – accused of forcing visitors to of Pasir Perawan Beach to pay entrance fees. They were sentenced to six months in jail. They were proven not guilty and the high court judge even acknowledge the right of the people to manage the coastal area and beach in their decision. In September 2018 Souliman – one of the community leaders – was sentenced to 1.5 years imprisonment on charges of property theft as he was living on land which was claimed by the company.

The community sees a pattern where the company is criminalizing the individuals with a voice in order to shut down the movement for defending their rights to land.

But the community of Pulau Pari is strong and continues standing up to defend their ancestral home. Families and children meet during the evening, when men have come back from fishing and the last tourists have left to go back to Jakarta, to discuss strategies for action. Women have taken up a major role standing up to security guards. Community leaders have been criminalised and jailed. In addition, the community has created a powerful network around them, and found the support of many national organizations, gathering human rights activists and environmentalists under the Save Pulau Pari Coalition.

Their efforts are beginning to bring results. The Save Pulau Pari coalition, recently accessed the Indonesian Ombudsman, who affirmed that the land certificates and the right of the company to use the land needed to be checked, because of mal practice and wrong procedures. The National Land Agency now has the power to revise the process and revoke the certificate, re-establishing the legitimate rights of the community. The government has the chance to prove its commitment, protect its own people and the environment and may include the case of Pulau Pari in the agrarian reform process, officially opened in September 2018.

The custodians of Pulau Pari

The coastal community are the custodians of Pari Island. LIPI, a renowned national public research institute, which attracts experts from around the country, has greatly supported the community and worked with them to learn from traditional conservation practices and couple this with cutting-edge environmental science. This includes mangrove and seaweed planting and the protection of coral reefs. Mangroves store carbon which is important in the battle against climate change and also protect the coast against a rising ocean, are a breeding place for fish and a natural fence protecting Pulau Pari from strong currents. 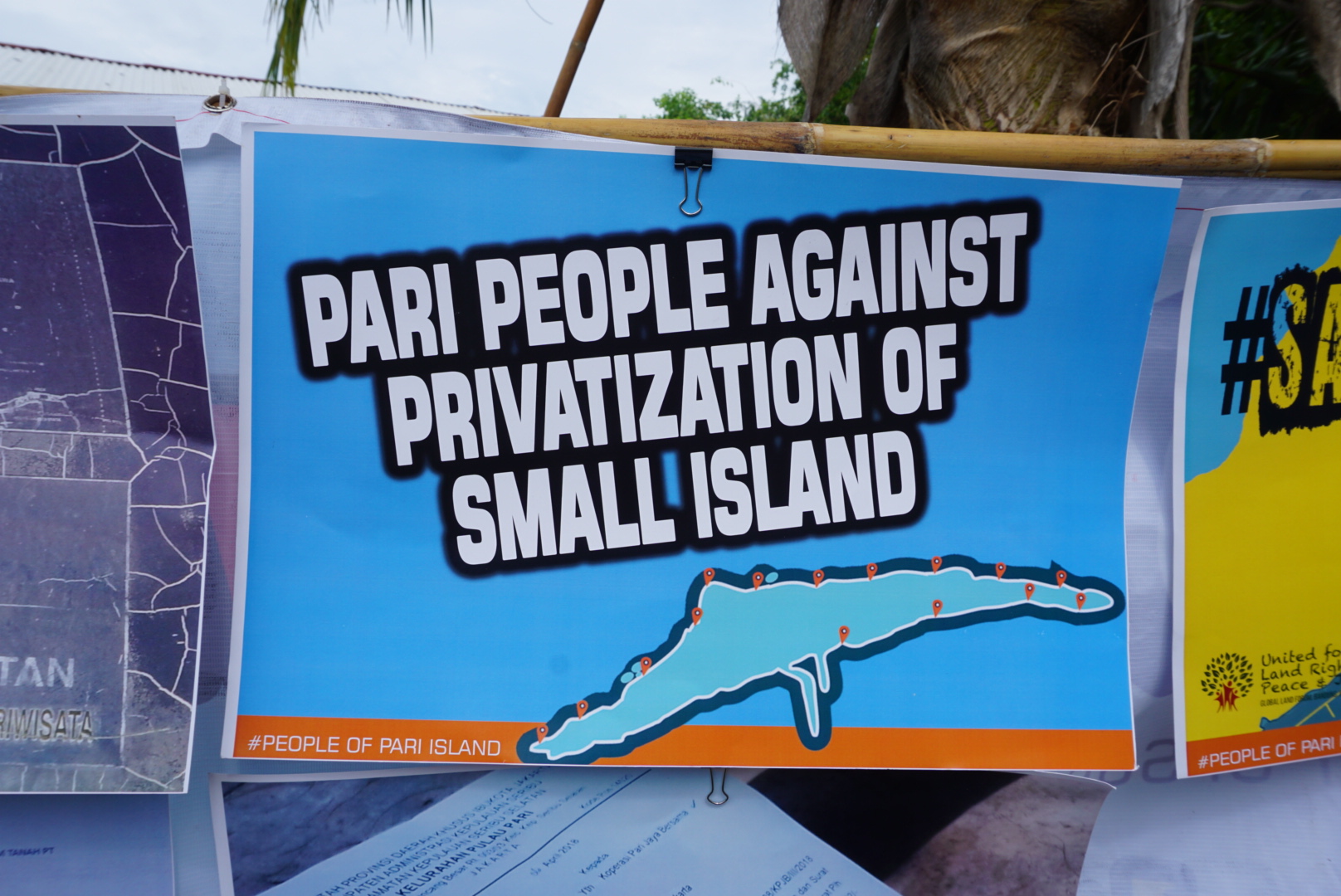 ‘’The community has conserved the island and its rich knowledge. If the private sector takes over the island, traditional knowledge will disappear’’ – A researcher at LIPI

“We fisher women do not expect anything fancy, or anything branded. We just want to live here as coastal people, as Island people, in harmony with the sea and entire eco-system”. – Woman leader from Pulau Pari

On September 21, 18 land experts from Africa, Asia, Latin America, Australia and Europe visited Pulau Pari. The field visit was part of the International Land Coalition’s Global Land Forum that took place in Bandung from 24 to 27 September and was the basis for the preparation of this article.