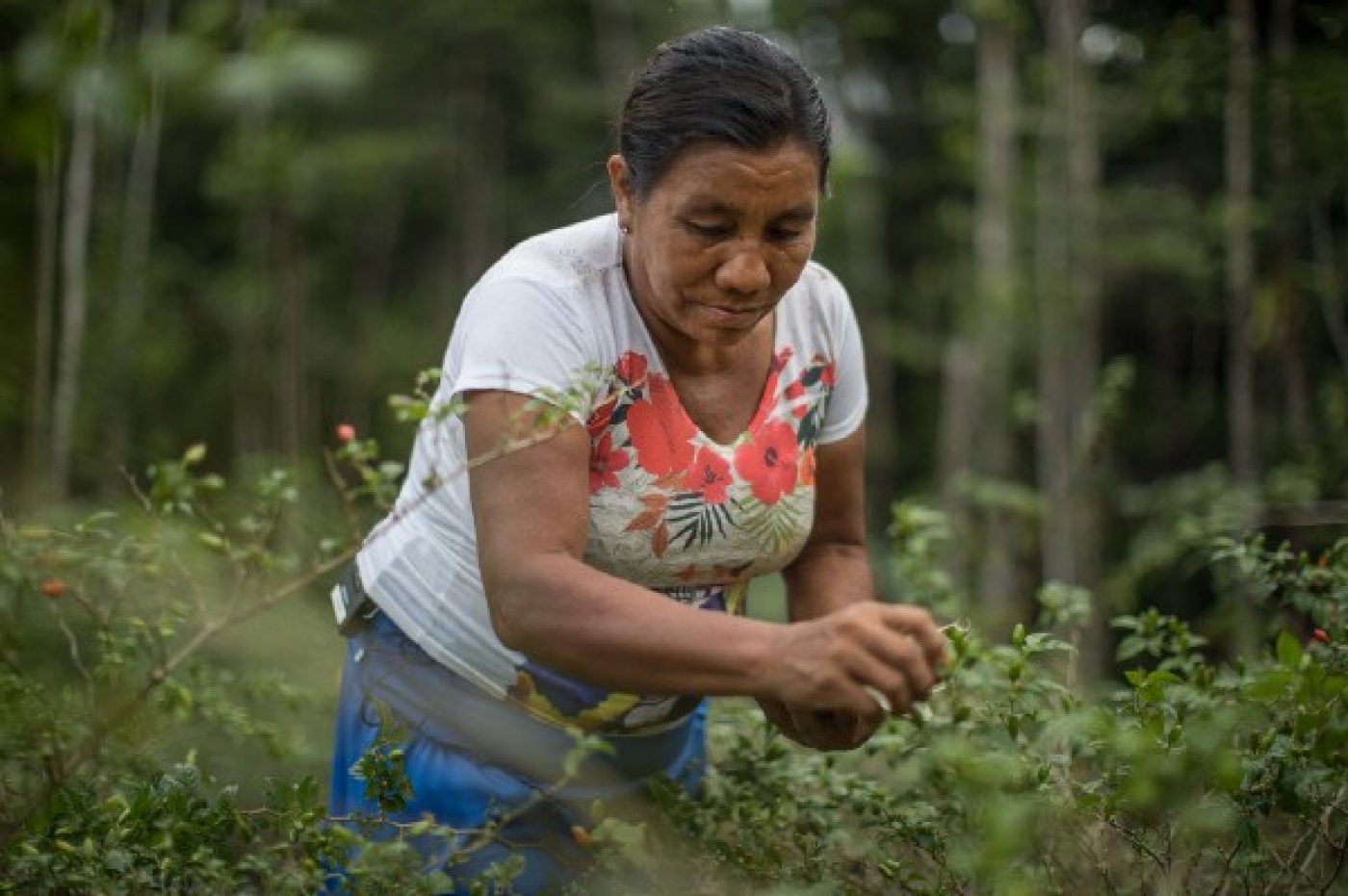 The women behind Baniwa Jiquitaia Pepper

From farming the peppers to labeling and managing the Casas da Pimenta [Houses of Pepper], the work of women underpins the production of the jiquitaia pepper, which is expanding in both domestic and international markets

It takes about an hour to get there from the community of Canadá. First, you have to cross the Ayari River, at its peak in May, in a motorized canoe. You then have to navigate through a flooded forest, land on a sandy shore and then walk a while longer. 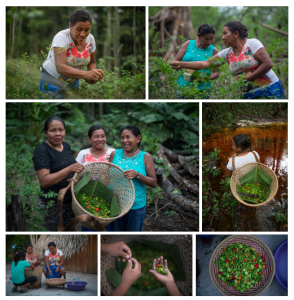 Baniwa women farm and pick the peppers. The process is completed by the family: Nazária and her daughters finish picking the fruit. Photos: Carol Quintanilha/ISA

Nazária Mandu Lopes, with an empty woven basket on her back, leads the way, followed by Ilda Fontes da Silva and Nazária Andrade Montenegro Fontes. Baniwa women in search of peppers — Aatti, in Baniwa, a member of the Aruaque family of languages — to celebrate the inauguration of the Casa da Pimenta Takairo in the community of Canadá, on the Alto Rio Negro Indigenous Land, Amazonas.

The 40-minute walk, in the long strides of someone who knows the forest, is marked by a cold, knee-high copper-colored stream. The path continues on to the small farm plot, which appears to open onto a new horizon.

The land is firm, covered in burnt tree trunks. Among them, sprout up countless cassava plants. The pepper plants are grown in a separate part of Nazária’s plot, where fruits of different sizes shine in red, yellow and purple. The names are special: curassow beak pepper (koitsi hitako, in Baniwa), shrimp arm pepper (dzaaka inapa), pencil fish mouth pepper (dzoodzo hitako), and many others. (Learn more in the book Baniwa Jiquitaia Pepper.) 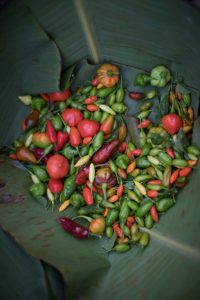 Nazária picks and talks, talks and picks. She tosses the colorful peppers into her woven basket. “This plot here was cleared by the father of my daughters all by himself. After the area is burned, we use this space for coivara [a type of slash-and-burn agriculture], to create a place to plant these pepper plants”, she said. Baniwa partners help in the harvest. The woven basket will soon be shining bright, ready to make the return journey to the community.

They are plenty and in many different types — a total of 78 recorded varieties of peppers — served by the Baniwa people every day. Used in quinhapira (pepper + fish, in Nheengatu), a strong and colorful stew, or on game grilled and pounded with dehydrated pepper. The burning sensation is intense but brief, and raises the spirits.

Nazária’s knowledge is a living example of the Traditional Agricultural System of the Rio Negro, declared Cultural Heritage of Brazil by Iphan in 2010 (Institute of National Historical and Artistic Heritage). This knowledge involves management techniques for small farm and garden plots, the food system, utensils for processing and storing and the formation of social networks for the exchange of plants and associated knowledge.

With Nazária’s woven basket full, and night drawing near, it was time to return to the community, where preparations were being made for the festivities of the next day, May 7, the day on which the doors of the Casa da Pimenta Takairo would open. The fifth unit of a network of houses that process Baniwa Jiquitaia Pepper that today punctuate the Negro, Içana and Ayari Rivers.

Watch the full story on the video below:

For a better future

Takairo, in the Baniwa language, is a small and powerful beetle, capable of cutting through thick tree branches that, when they fall to the ground, serve as a sign for the communities that it is time to clear the plots.

When the Casa da Pimenta Takairo was inaugurated, with the community of Canadá in celebration, the design of the beetle was unveiled. Nazária was again out front, at the top of the steps displaying her basket with the brightly colored peppers. 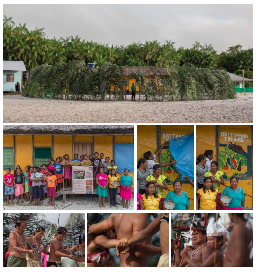 Celebration to inaugurate the Casa da Pimenta Takairo, in the community of Canadá, on the Ayari River. Photos: Carol Quintanilha/ISA

“Now that we have the Casa da Pimenta in our community, I intend to increase the production of peppers to be able to sell and make some money so I can buy things I need at home. Because we live so far from the city, it is always difficult for us to have access to manufactured goods,” explained Nazária.

Earning income from the peppers was something Baniwa women, like Nazária, had insisted on. In 2005, at a meeting of the Indigenous Organization of the Içana River Basin (Oibi), they pressed for a solution.

“A survey of natural resources was carried out to discover what could be exploited without harming the environment; it cited the titica vine, flour, pepper, etc. They selected pepper because all the women plant it. Additionally, it is easy to farm and care for and because it is eaten by everyone throughout the region,” recalls Alfredo Brazão, sales manager for Oibi.

In slow, steady steps, the production chain for pepper was formed. Sales were slow at first. But the final product, the Baniwa Jiquitaia Pepper, an unknown gem, began to take shape and generate revenue.

Between 2012 and 2017, 20,000 jars of Baniwa Jiquitaia Pepper were sold. The money is passed on, in full, to the families that do the work and the administrators of the Casas da Pimenta Network.

According to Nelson da Silva Tomé, who teaches at the Escola Tiradentes Eeno Hiepole, in the community of Canadá, the money comes at a good time to improve the outlook for young people and the well-being of the Baniwa people. “With the peppers sold, we receive our payment and, with the money, we can purchase the materials we need, clothes for our children, build houses for our children and, in this way, ensure a better future for them,” he said. 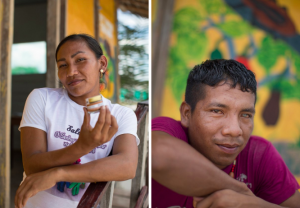 The Casa da Pimenta Takairo, in the community of Canadá, expects to receive peppers from the small farm plots of 25 families. Walter Lopes da Silva, co-administrator of the unit, expects delivery of 360 jars (15 grams each) every three months.

“This is good pepper. It is made with a lot of care. The producers deliver fresh pepper to us. We want to send our pepper to the outside world so they can try our food. I hope they like it and that they will continue to buy from us,” said Selma da Silva Lopes, who manages the house of pepper together with Walter.

At the end of May, Selma and Walter delivered lot C01, their first, to the Oibi headquarters in São Gabriel da Cachoeira. A total of 509 jars were produced from the peppers picked from the small farm plots of 19 families. By December, production is expected to rise to 2,100 jars.

The bottom line is that this enterprise is financially viable. The associations involved with the production of pepper have acquired the management and entrepreneurial skills they need to generate sustainable income. Self-esteem is also part of the equation. Baniwa men and women emphasize that they are disseminating their culture through the pepper. As do their leaders: “Each little jar is like a book that we write and send to the world to read.”

The political dividend of the moment is the leading role of women in the production of the pepper, as well as handicrafts. It is clear that women have gained prominence in the grassroots indigenous associations of the Rio Negro, reckons Elizângela Costa, coordinator of the Department of Women of FOIRN (Federation of Indigenous Organizations of the Rio Negro).

“Through the pepper and through handicrafts, indigenous women have become the presidents of women’s associations. Previously there were none. All of these associations were managed by men,” recalls Elizângela. “Of course there is still room for improvement, but this power has also allowed them to manage the associations,” she observes.

Pepper is part of the daily routine of the communities of the Rio Negro. Among the Baniwa, on days of celebration, it is the most appreciated of all the ingredients. The commercial success of the product, based on the work of the Casas da Pimenta, was surprising.

“When they began the pepper project, the women could not imagine that one day it would be bought in other states or countries as has happened,” said Alfredo Brazão, sales manager. “This news makes the women happy because they know the pepper — read, Baniwa people — is increasingly famous. This is a source of great joy for them.”

The Baniwa Jiquitaia Pepper is making consistent progress in domestic and international markets.

The product features on the menus of Michelin star restaurants like Alex Atala’s D.O.M., and Helena Rizzo’s Maní, and is an ingredient in innovative products, such as the Jiquitaia Pepper Sauce with Açaí — Orgânica da Soul Brasil, as well as the chocolate bar with Baniwa Pepper by Na’Kau.

Partnerships for new products, developed with the support of Selo Origens Brasil [Brazil Origin Seal], involve cooperation and return of part of the profits from the sales to a sustainability fund for the Baniwa and Koripako. All told, there are 29 commercial partners.

In Ireland, the beer maker Hopfully Brewing produces Baniwa Chili, a seasonal label made with pineapple, mint and pepper. In the image rights agreement, an unprecedented contract to compensate the communities was signed between the breweries and the indigenous people (Learn more) In the United States, Baniwa Pepper is sold by Culinary Culture Connections, a company dedicated to the fair and transparent sale of forest products.

Despite the progress, the communities are still constantly bombarded by businessmen and illegal miners, who try to bribe leaders to obtain informal permission to exploit their lands. 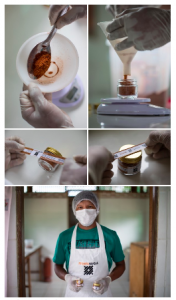 Shortly before the inauguration of the Casa da Pimenta Takairo, in the community of Canadá, businessmen proposed the mining of tantalite along the banks of the Içana and Ayari Rivers to the Baniwa. They were exposed. A public letter of rejection, signed by the community of Inambu and addressed to Funai, the Federal Attorney’s Office of Amazonas and Foirn, was read before everyone at a community meeting.

“We are aware that our territorial rights are viewed as impasses by political and business interests. We know that the national political scenario is not favorable to our rights,” reads the text.

The pressure for mining on the Alto Rio Negro Indigenous Land has a long history, as well as the exploitation of 23 indigenous peoples that have inhabited the region for millennia.

“The miners and businessmen pose a great threat to us. Along our Içana River and throughout the region of the Negro River, since about 1984, they have come through here and solicited pieces of land to conduct research on mineral resources,” says André Baniwa, leader of the Indigenous Organization of the Içana Basin (Oibi).

He continues: “Our work is done in small steps. That is why, they [miners and businessmen] are working against us all the time, wanting to beat us so that we will always be dominated by them.”

Opposition to counter the predation of their territory is offered by Nazária Mandu Lopes and her woven basket full of peppers ready to be dehydrated, ground and placed in the little jars.

“Pepper is a traditional food of our grandparents. They used it as a seasoning, and made quinhapira to offer to relatives who came to visit. That is why pepper is inseparable from our food. We cannot lose this value, quite the contrary, we will continue to plant our peppers forever and offer more to people in the future,” she said.

Pimenta Baniwa can be purchased online from Instituto Socioambiental, at the Mercado de Pinheiros, in São Paulo, and in emporiums throughout Brazil. See the list here.

The Baniwa Pepper project is a long-term partnership that involves ISA (Instituto Socioambiental), Instituto ATÁ and Oibi (Indigenous Organization of the Içana Basin). This report was prepared with support from the European Union.

This article was originally posted on Medium by ISA: https://medium.com/social-environmental-stories/the-women-behind-baniwa-jiquitaia-pepper-e5e91cf103f1