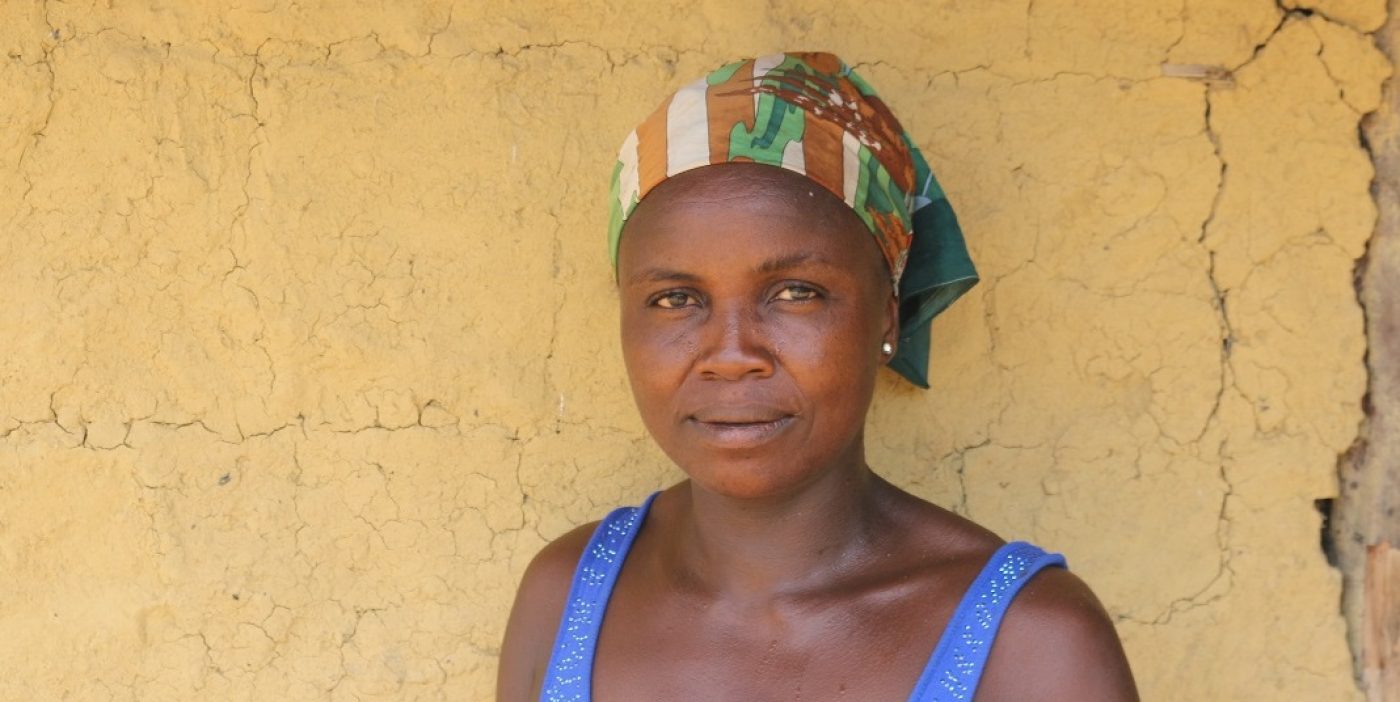 “When we sell our land, what will our children inherit?”

Maryeadeh Tardeh is a land rights defender in River Cess, Liberia, who along with her community Kahnkaye,  is standing up to an oil palm company.

This is her story.

Sitting under a thatched hut in Kahnkaye Chiefdom in River Cess County, deep in Liberia’s central west, Maryeadeh Tardeh is about to end another day of hard work. She cuts huge tubers of cassava into pieces and places them into blue barrels of water. They will stay there up to the next day and she will pound them into fufu, a desired Liberian dish. The cassava she harvests comes from three farms. “When I was a small girl, I saw my ma, my grandma and my aunty holding cutlass,” Tardeh, 41, explains. “They used to brush and plant for us to eat. Now I am big now, I am on it, too. That is what I have been doing to send my children to school.”

Tardeh has six children, two of them the children of her husband by another woman who died earlier this year. She is worried that her children won’t have land to farm or even live on as an oil palm company has been persisting for more than two years to take their land.

Equatorial Oil Palm (EPO) signed a 50-year concession with Liberia for 169,000 hectares land. The company has held several meetings with Kahnkaye but the residents are firm not to allow the company in. “When we sell our land, what will our children inherit when they get big? When you come to our home and you don’t have a place to stay and make a farm, what will you do? We will not allow them to take our land,”says Tardeh.

Currently business is booming for Tardeh. Cassava and fufu are in demand more than before as neighboring areas no longer produce as much as before. In the past she sold a bag of fufu for LD450 (less than $5), now she can sell it for LD 1,500 nearly ($15). “A car came here and carried 10 bags of fufu and I am preparing the others for tomorrow. I am really enjoying business now,” she says, wearing a big smile. In addition she points out that as a woman, this is empowering for her as it brings her an independent income.

“The men can no longer take advantage of us. Our cassava farms are making money day and night. That is why we will not give our land to any company, ‘’she says.

While some people in Kahnkaye do want to allow EPO in, on March 23 this year the chiefdom held elections in response to the EPO matter, removing chiefs and elders deemed to be siding with the company. They changed their Paramount Chief and Clan Chief and replaced them with people who oppose the company. “We are plenty here who don’t know anything,” admits Tardeh. “But I do know that if the company comes here, I will not really benefit from it. We only want our land. When we make cassava farm, we will be able to send our children to school.’’

Over three million women and men in Liberia – roughly seventy percent of the population – live in rural areas – and depend on land that is largely managed through community-based ownership. And yet, this collective land ownership system is still not recognized by the Government which instead grants concessions for logging, mining and agri-business that leave thousands of families without land to produce food. Tardeh and her community are lucky that they still have their land.

Liberian Senators could pass a key piece of legislation that would ensure Tardeh’s right to land is protected – the Pro-Community Land Rights Act, drafted in 2014, would recognize communities’ rights to own, manage, and preserve their ancestral lands. This Act would give the people the power to decide the future of their lands and protect them from big corporations.

Join us in calling on President George Weah and the Liberian Senators to champion the rights of the people and to foster peace and security by passing the Pro-Community Land Rights Act.

Story and Photos with thanks to James Giahyue