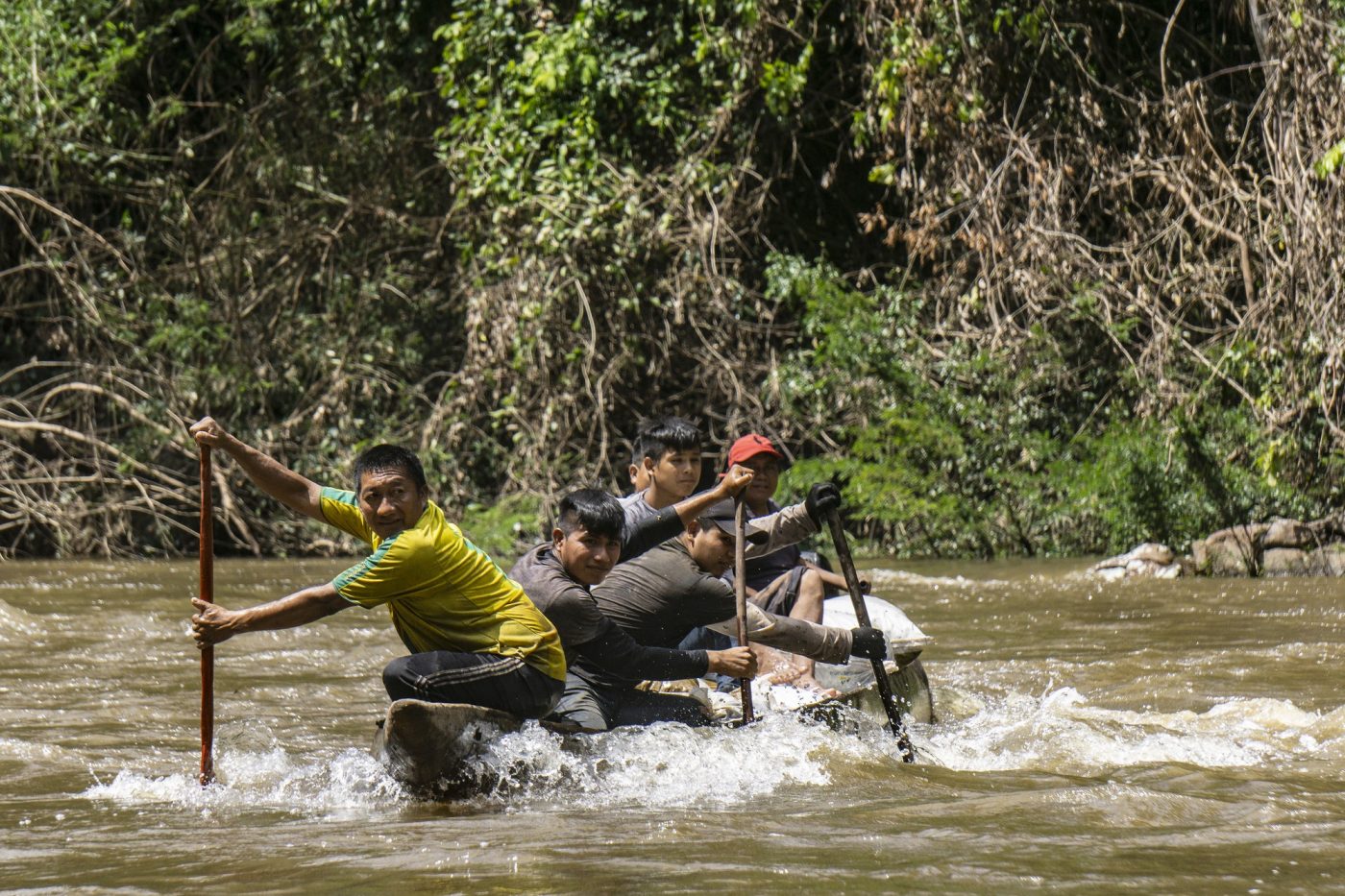 Where do Brazil nuts come from?

The Wai Wai people of the Amazon explain

The Brazil nut has always been a centerpiece of Wai Wai food culture. With the organization of the production chain, it has become a driver that is transforming lives and reinforcing the protection of a territory afflicted by invaders

Live embers burn in a hut in the village of Jatapuzinho, Trombetas-Mapuera Indigenous Land, Roraima. It is a cloudy morning in June that begins long before sunrise. Among the banana leaves, shiny grills and pans, Wai Wai work proudly to present nine bountiful dishes with tîtko (pronounced tãtko), the Brazil nut of the Wai Wai.

In just a few hours, strong and skillful hands display an impressive versatility. A quick look around the maloca (ancestral long house) is enough, at the stations assembled with great care, to understand that the Brazil nut is much more than just a healthy seed. The Brazil nut of the Wai Wai is, above all, a centerpiece of its culture, of its food sovereignty.

In command, the partners Rebeca and Lenita Wai Wai show how the Brazil nut starch and batter — without adding salt or sugar — must be shaped with care to the stalk to be transformed into a dense tube that, after roasting, takes on a light natural sweetness.

“I learned Kapayo R̂epu from my mother when I was little,” recalls Rebeca. “We roast it slowly, unhurriedly, until it is brown on the outside to give it flavor.”

In Kapayo R̂epu, paçoca and the beiju (tapioca pancake), the taste of the Brazil nut is accentuated by the heat. Tîtko Xukmaran, the juice of the Brazil nut, is full of energy and smoothness. “The white man’s boxed juice is not healthy,” affirmed Ruciene Wai Wai. “Ours is natural, we pick it here from the forest, it is good. We always use Brazil nut milk to make juice.” 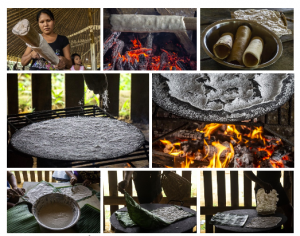 The recipe is simple, but harvesting it from the forest, as Ruciene said, is hard work that takes months. The crop is at its peak between May and August — interestingly, because it is located above the equator, it coincides with the off-season for the other Brazil nut regions of Brazil. A time in which entire families leave their villages to live in encampments, some along the banks of watercourses in the basins of the Anauá and Jatapuzinho Rivers, others on solid ground inside the forest, on the Wai Wai and Trombetas-Mapuera Indigenous Lands.

Inside the forest, they gather Brazil nut fruits (that contain the seeds), open them with machetes, wash them in the river, separate the good ones, place them in sacks of roughly 50 kilos and ship tons of these — in long canoes — down the Anauá River, until they arrive at the villages where they will be washed, dried and sold. An epic journey of work with the personality, strength and perseverance of the Wai Wai.

Watch the journey of the Wai Wai people as they collect Brazil nuts in the video below.

‘The Brazil nut is like a bank for the Wai Wai’

The encampment of Geraldo Pereira dos Santos, along the banks of the Anauá River, is known as Tetéu. To travel from the village to his base camp, as the Wai Wai like to call it, takes at least five hours by river. The travel time depends on the difficulty in navigating the three falls — Conceição, Lilita and São Roque — that scrape the motorboats as they are dragged over the rocks and increase the risk of a serious accident. 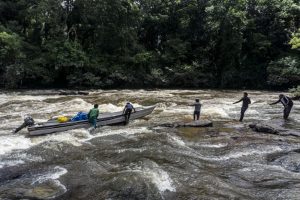 It is only at night, while the family is resting ahead of the work of the following day, everyone anxious to collect Brazil nuts, when the soft-spoken Geraldo relates some of his experience. He’s been a tuxaua (chief) of the village of Anauá, an indigenous community health worker, travelled throughout the Amazon, and can tell stories like no one else. 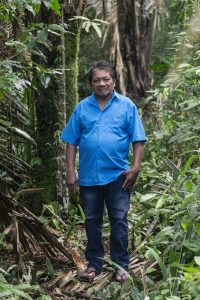 “I purchased my first outboard motor with Brazil nuts. I put together over 150 sacks, loaded the canoe and paddled downriver to sell them,” he said proudly.

For him, work in the Brazil nut groves means mobility, health and a better quality of life. It’s not by chance that they are the most valuable assets for the Wai Wai of Roraima. The harvest areas are divided amongst the families and relatives of Pará, Amazonas and Guyana, who travel to the base camps to help. It supplies income and food for the entire year.

The Wai Wai are an indigenous people, numbering over 2,500, that speak a Karib language. The Brazil nut is their main source of income.

The harvest for 2018 is expected to yield 330 tons of Brazil nut. The price of a 10 kg can, according to the bread company Wickbold, is around 44 BRL — 76% more than the 25 BRL paid by middlemen in the region. An important step forward in terms of planning, transparency and final revenue in the hands of each family, part of the Origens Brasil® initiative (find out more).

An extra incentive so that, on the following day, two canoes made from tatajuba trunks, each the result of over a month of work and each measuring around 14 meters in length, come to shore in front of the Japim base camp, which belongs to tuxaua Tarcizio Yakima Wai Wai, can be loaded and continue on to the falls of the Anauá River.

From the Brazil nut grove to the village 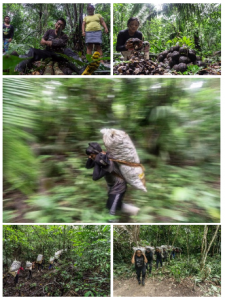 Narrow and winding, the Anauá River is full of hidden dangers. Only when the level of the water rises with the seasonal heavy rains and reaches a certain level, marked by the Wai Wai on rocks, is it clear that it is time to head downriver with the nuts. The river rises rapidly, and the soberness of the Wai Wai quickly transforms into excitement for the impending journey downriver.

The departure for the Brazil nut groves, in the morning, is marked by a banquet of abundant game on the indigenous land. Early morning, pacas, peccaries and monkeys sustain the hard work of the nut collectors, as well as manioc flour and pepper. The hikes are long, over 2 km, with slopes to climb up and down and streams to cross.

After picking the fruit from the ground around the Brazil nut trees, the Wai Wai begin to form a mountain of urchin-like shells, and begin to use their machetes to remove the nuts, then clean them and put them in sacks. A monumental effort is needed to walk with 50 kg of Brazil nuts on their backs.

Back at the base camp, the sacks are reopened for washing and the good Brazil nuts are separated from the bad. Next, they are placed in sacks again and then finally loaded on canoes.

The procedure is the consolidation of good practices in Brazil nut management, employed for a decade by the Wai Wai. “We have already learned good practices to be able to offer a quality Brazil nut. We have to teach our children to continue to sell a clean Brazil nut,” stated Fernandinho Oliveira Wai Wai, president of the Association of Wai Wai Indigenous Peoples (APIW). 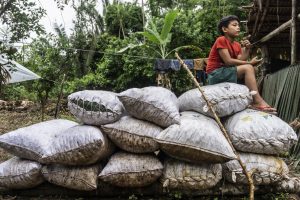 Brazil nuts handling is part of the routiune of the Wai Wai families. Photo: Rogério Assis/ISA

Sons and daughters, who receive 15 days off from school, take part in the work and learn everything about handling Brazil nuts. “When they return to school after the Brazil nut work, they recount how much they learned from their parents about the territory. They talk about the plants and animals that they have seen and eaten, the tasks of the Brazil nut groves,” said indigenous teacher Renato Wai Wai, of the village of Jatapuzinho. “They are very proud when they come back.”

The day wears on and, gradually, the sacks are piled one by one into the tatajuba canoes. The entire cargo weighs at least 2 tons. 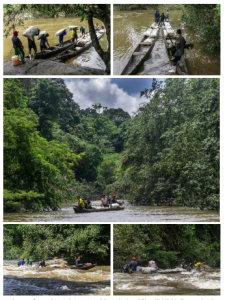 A cargo of around 2 tons is transported down the Anauá River, Wai Wai Indigenous Land. Photos: Rogério Assis/ISA

On the bow of the main canoe, Nataniel Wai Wai serves as the lookout and guides the vessels through the treacherous paths of the Anauá River. In the rapids, the 15 hp motor gives way to frenetic work with paddles to keep the canoe level until the final destination: Conceição falls, a barrier that is almost always impassable for canoes.

There, the sacks are unloaded and stored for another leg of the shipment to the villages, where another washing, separation and drying of the Brazil nuts is carried out. The last step before the final bagging and selling.

When seen from space, the Wai Wai and Trombetas-Mapuera Indigenous Lands, home to Wai Wai villages in Roraima, are separated by a high pressure zone of deforestation that skirts BR-210, a 410 kilometer highway that links Missão Catrimani, in western Roraima, to the Jatapu River, in southeastern Roraima. This stretch of highway is symbolic of the military project to occupy the northern zone, which welcomed federal settlement and colonization projects at the end of the 1970s.

The cluster of new cities of São Luiz do Anauá, São João da Baliza and Caroebe form a corridor along BR-210 and are the backbone of predatory development, with the opening of side roads along the periphery of the Wai Wai Indigenous Land. The theft of Brazil nuts and timber is constant. Result: the Wai Wai of the villages of Xaary and Anauá transferred families to the edges of their indigenous land to inhibit invaders.

Along the side roads near the village of Xaary, for example, the deforested area has given way to farms, with an expansion of pastures and cattle herds. And tensions have risen significantly in recent months, making it difficult to ship the Brazil nut harvest. “If we’re not careful, 10 years from now there will be no more forest,” predicts Valdeci Noro Wai Wai, leader of the village of Xaary. 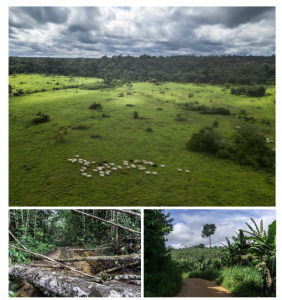 Deforested area (top) has given way to farms, with an expansion of pastures and cattle herds. A path (below left) used by loggers. A Brazil nut tree (below right) stands alone in a banana plantation. Photos: Rogério Assis/ISA

During the travels of this ISA reporter through the region, a car with a loudspeaker announced that the First Festival of the Rural Worker in Caroebe would have a drawing for prizes, like chainsaws. “They cut so much down, destroy the Brazil nut groves, invade our lands. I’m against this. And you, what do you think?”, challenges tuxaua Tarcizio Yakima Wai Wai.

The future is uncertain. The continuation of construction on BR-210, beyond the Jatapu River, toward Amapá, is on the agenda and could create a new front by allow agriculture and farming to encroach on the Trombetas-Mapuera Indigenous Land.

On the other hand, there are reasons for celebration. The reinforcement of good practices in the management of Brazil nuts, and the partnership for the fair and transparent sale with companies, favors the planning of harvests and the protection of indigenous lands against invaders. “We have to continue passing on this knowledge [Brazil nut management] to future generations,” said Vanilda Wai Wai da Costa, of the village of Jatapuzinho. “And, in this way, preserve the Brazil nut and the forest.” 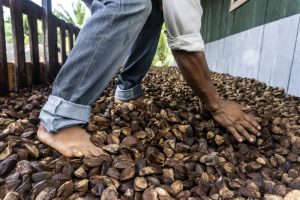 This report was prepared with the support of the European Union.
Translation: Beatriz Velloso

This article was originally posted on Medium, by ISA: https://medium.com/social-environmental-stories/where-do-brazil-nuts-come-from-the-wai-wai-people-of-the-amazon-explain-7485b735deaa